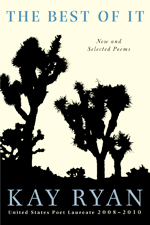 
Kay Ryan, born in California, a Marin County resident, with her late partner Carol Adair, for some three decades, has in the last several years become one of the brightest lights in American poetry. She was named U.S. Poet Laureate in 2008 and served for two terms, and then on April 18, 2011, to top off prizes and honors she'd already won, including fellowships from the National Endowment for the Arts, the Ingram Merrill Foundation, and the Guggenheim Foundation, the Maurice English Poetry Award and the Ruth Lilly Poetry Prize, she was awarded the Pulitzer Prize in Poetry for The Best of It, New and Selected Poems.

Ryan is very much a one-woman show, an outrider who writes like no one else in American poetry. Her poems are typically miniatures, short-line poems that run for less than a page. She frequently uses rhyme, not in fixed patterns, but as the sounds please her ear, and rhythmic molding of phrases so that the poems resemble scrimshaw, small sonic sculptures. In most cases her poems are impersonal; they are brief discourses on their given subjects in plain words and open phrases, but their points are subtly, often mordantly, woven. They create a kind of Ryan-land, much as the best cartoonists do, a beckoning art space, fun to inhabit but teasing the reader's mind and soul.

For Bay Area residents who have enjoyed her readings over the years, her low-key, deliciously witty performances, Kay Ryan's laureateship and Pulitzer Prize must be deeply satisfying, an inspiring triumph. She's not a poetry hobnobber; she didn't have the platform of a professorship at a prestigious university. Instead, she taught for three decades at a community college in Marin and championed the role of community colleges in education as laureate. In an interview with the Washington City Paper at the end of her second term she called herself a "whistle-blower" for the "much underpraised and underfunded community colleges across the nation." Out there in Fairfax, California, she quietly wrote and published her books of poems, including Flamingo Watching (2006), Elephant Rocks (1996), Say Uncle (2000), and The Niagara River (2005), quietly built her career, and more or less on her own she's climbed the mountain.


For more on Kay Ryan, see "A Lyrical Intellect," a full-length interview with Kay Ryan, conducted by Marit MacArthur in 2004 and published in 2005; posted in the Poetry Flash Archives.


The Phenomenology of Addiction: Two Poems by Dawn McGuire
by David Shaddock